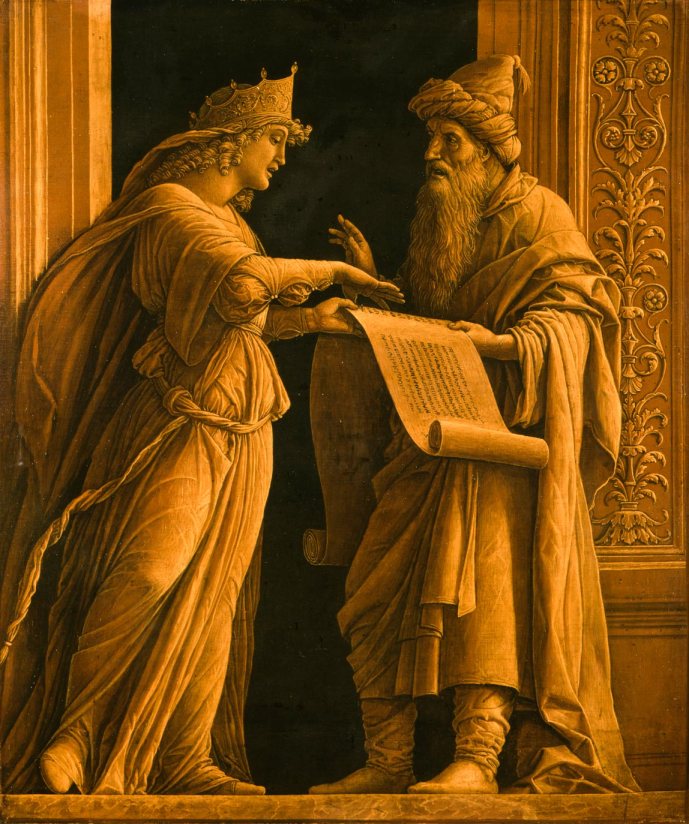 The prophetess Huldah answers the high priest Hilkiah’s questions about the Scriptures.  Was she allowed to do this?

It’s not difficult to read between the lines of my study guides (to Paul’s Journey Letters or to Paul’s Prison Letters, for example) and recognize that I believe there should be no restrictions on what women can do in communities of Jesus’ followers.  In the guides I acknowledge this as a question on which believers can legitimately differ, and I make every effort to explain both points of view so groups can discuss the issue amicably.  But I think my personal sympathies are probably pretty clear.

I’d like to make them even clearer here.  When a friend of mine saw this post in which Steve Holmes said that for him to defend the ministry of a woman like Phoebe Palmer “would be as ridiculous as a worm trying to defend a lion,” my friend commented how valuable it was for her to hear male biblical scholars affirming the ministry of women.  And so, particularly to encourage women who feel called to ministry, I want to add my own (male) voice in support of their calling.

In recent months, at the request of some friends, I’ve been blogging privately on this topic so we could discuss it together confidentially.  We’ve reached a point of resolution in our conversations, and so with their agreement, I’d now like to share my reflections publicly here.  The material from this formerly private blog is too long (17 posts, nearly 10,000 words) to appear in its entirely in this venue, so I’ll summarize it instead.  But I’ll provide links along the way to those fuller discussions, for those who are interested in pursuing specific points in more detail.  If you’d like to see it all (except for the original participants’ comments, which have been removed), it starts with this post.

Those discussion are more wide-ranging, but in these posts I’d like to focus more narrowly on the biblical statement that is most often taken to support restrictions on what women can do.  Paul writes in 1 Timothy, “I do not permit a woman to teach or to exercise authority over a man.”  Doesn’t that settle the question?

Actually, whether it does depends on what the Bible is and what we’re supposed to do with it.  If the Bible is essentially a collection of propositions, and if we’re supposed to isolate and collect these propositions in order to answer questions that we pose to the text ourselves about belief and practice, then this statement speaks pretty clearly and decisively to the question, “Should there be any restrictions on what women can do in communities of Jesus’ followers?”

Some further statements that apparently take the same position, although less explicitly, can be brought in for support (for example, “The head of every woman is man”).  Other biblical statements that seem inconsistent with this working conclusion can be accounted for somehow (“Deborah . . . was leading Israel at that time . . . and the Israelites went up to her to have their disputes decided”).  But other passages aside, if we take this approach to the Bible, the statement in 1 Timothy is the definitive one that seems to settle the matter.

The problem is, the Bible is not a collection of propositions that we are supposed to isolate and collect in order to answer questions that we pose ourselves.  The Bible is instead a library of complete works, of greatly varying kinds, that as a whole tell the grand story of God’s initiatives over the course of human history to redeem fallen humanity, culminating in the person and work of Jesus Christ.  (Seen in this way, the Bible has many more questions for us than we have for it, starting with, “What are you doing to join in this grand story?”)

Because this is the true character of the Bible, no biblical statement is true or valid in isolation.  Each one appears in the historical and literary context of an entire work of literature, itself placed within a grand overarching story, and so no biblical statement makes sense in isolation.  If we really want to understand what Paul meant by his statement in the first letter to Timothy and what its implications are for us today, we need to situate it in its historical and literary context.  That is what I will seek to do starting in my next post.

12 thoughts on “Does the Bible say that women can’t teach or have authority over men? (Part 1)”