Update: The artist behind the Word-for-Word series has successfully completed a Kickstarter campaign to fund the next volume, the Book of Esther. Follow that link to see several pages from the new work already taking shape.

One of my professors in seminary compared reading Paul’s letters in the New Testament to listening to only one side of a telephone conversation. The two people in the conversation have a shared understanding of the situation they’re discussing, and they’re talking to each other in light of that understanding. But if a listener doesn’t have the same background, things will make a lot less sense to them.

I think the observation actually applies to the Bible as a whole. The biblical writers were addressing an audience that shared an understanding with them of the historical and cultural background they were speaking into. We today typically don’t have that same understanding, and so we either find that some things in the Bible don’t make sense to us, or else we think we understand them when we really don’t.

That’s why I believe so much in the project known as the Word for Word Bible Comic. As I’ve described in some previous posts, it’s a series of graphic novels being designed by Simon Amadeus Pillario. (I serve as an unpaid biblical consultant to the project.) Each volume depicts an entire book of the Bible. The artwork is based on painstaking cultural, historical, and archaeological research, so that readers (viewers) can experience the biblical story with a much greater understanding of its background. This gives much deeper insights into the story itself.

And so I’m very excited that The Gospel of Mark has just been released as the latest volume in the series. (You can order a copy here.) Let me share a few ways in which seeing a graphic depiction of this version of the story of Jesus’ life has helped me understand it better.

One thing that always puzzled me a bit was how Jesus could teach in the Jerusalem temple, often challenging the Pharisees and other religious teachers and speaking to them quite harshly, but then slip away and escape capture when they tried to arrest him. I mean, he was in the building, right? How hard would it have been for them to find him? But when I saw some of the panels depicting the temple in the graphic-novel version of Mark, I said to myself, “That was a big temple!” And it was filled with huge crowds. I saw how Jesus could have slipped into the crowd or down a staircase and out of sight. Below are a couple of panels that show this. (There’s also a full-page panel in the graphic novel that shows the whole temple layout and the huge crowds it could accommodate. It’s just one of many full-page panels that capture key elements of the story of Jesus’ life in one sweeping glance.) 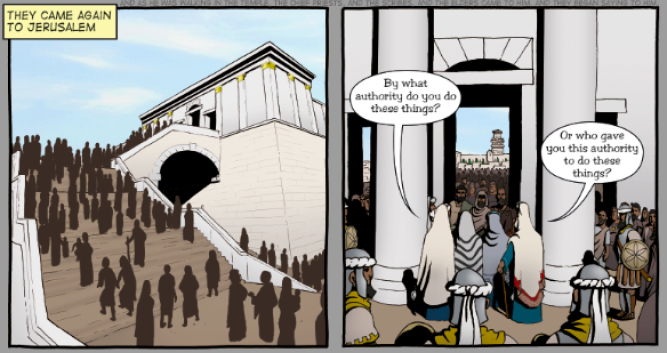 Another thing I’ve often wondered about was how people could walk in on Jesus and ask him questions, beg for favors, or even pour perfume on him when he was eating in someone else’s home. And what exactly do the gospels mean when they say he was “reclining at the table”? How could you eat when you’re lying down? The Gospel of Mark in the Word for Word series has several depictions of such meals, including the one below, that answer these questions. This particular panel is based on illustrations that come directly from the first-century Mediterranean world. It shows how people were actually allowed to enter the room and stand by the walls and listen when someone was entertaining a teacher. 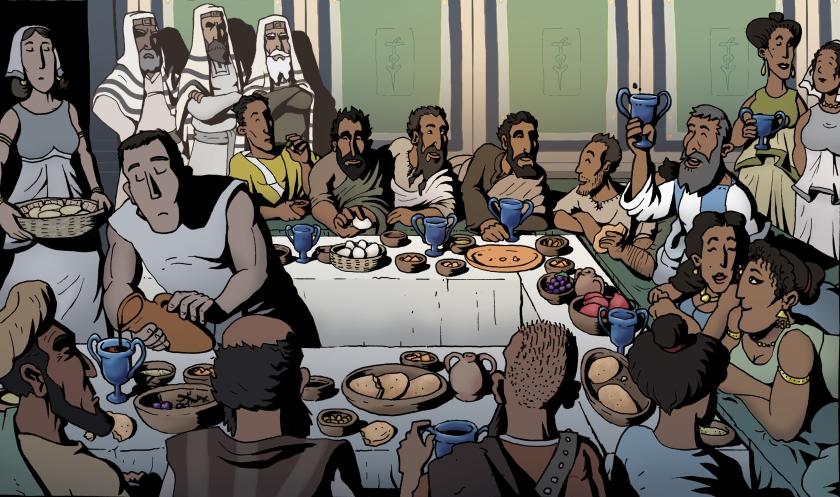 Another incident I’ve wondered about in the gospels is the one in which the people of Nazareth try to throw Jesus off the cliff at the edge of the hill  their city was built on. This episode isn’t related in the Gospel of Mark, it’s in Luke, but the graphic novel version of Mark answers the question just the same. One panel shows Jesus and his disciples approaching Nazareth: 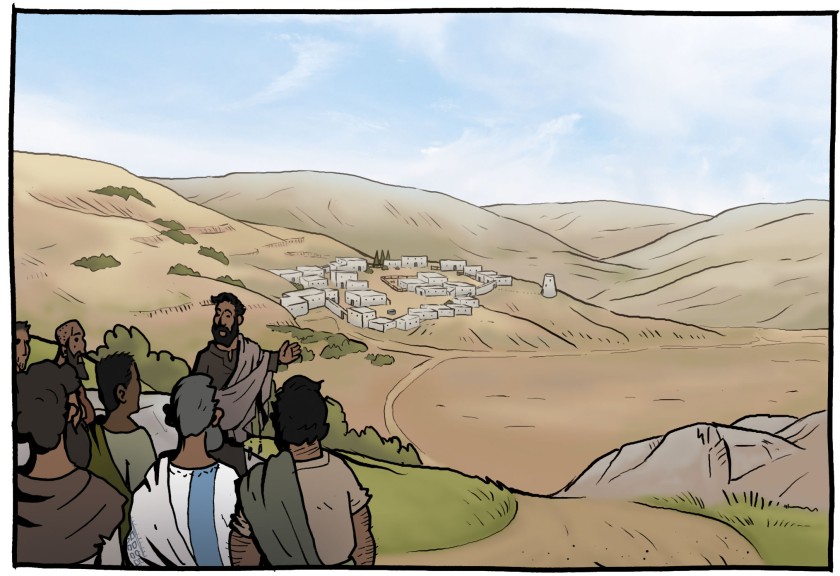 This is an accurate rendition of the layout and location of the city in the time of Jesus. Already we get the idea that we’re in mountainous country. We can see how there might be a cliff at the far edge of the city. But a later panel shows even more specifically how a settlement in first-century Palestine, though it’s not Nazareth specifically, might have been built in such a precarious location. 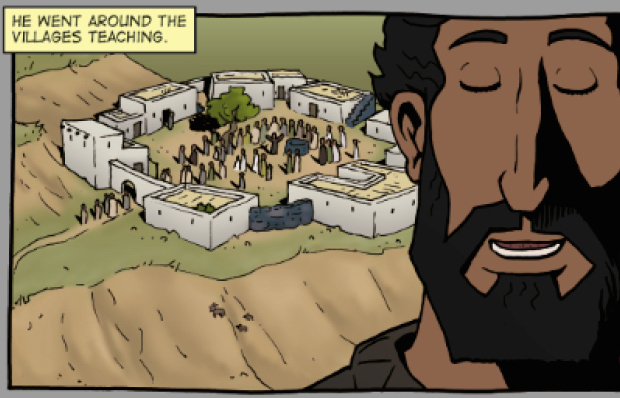 These are just a handful of the insights I got personally from reading through Mark as a graphic novel (even though I’m supposed to be a biblical consultant to the project!). I’m sure it will give you as well a greater appreciation for the historic and cultural background to the story of Jesus, and thus for the story itself.

I also can’t resist mentioning how delightful I continue to find the imaginative ways in which the artist envisions the story. It has been said that reading is a creative act, and I find Pillario reading the story of Jesus, and re-telling it visually, in consistently creative ways. For example, here’s how he envisions the cloak-and-dagger episode in which Jesus’ disciples find their way stealthily to the upper room where they’re supposed to prepare the Passover supper: 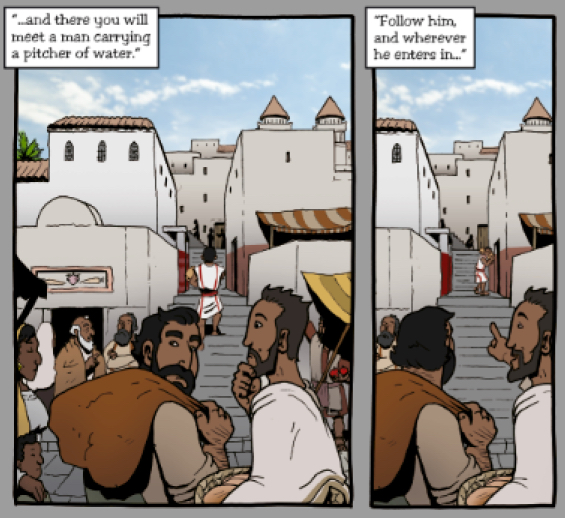 Another of my favorite panels is the one that shows Jesus answering the question about paying taxes to Caesar. He asks to see a coin and he uses it to give the perfect answer, and as he does, he tosses the coin back to the person who brought it! A wonderfully imaginative way to envision that episode. 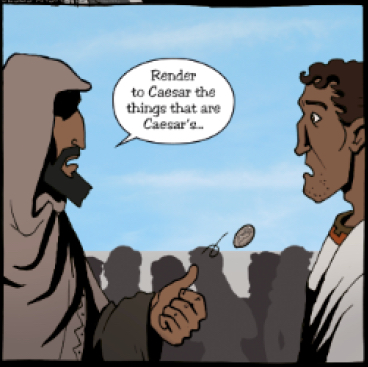 But finally, I’d also like to stress that for the artist, this isn’t just a commercial or even a creative project. It’s an act of devotion. While the graphic novel presents the text of Mark, it visually includes episodes from all the gospels. In that way, it’s a “life of Christ.” And writing (or in this case drawing) a life of Christ is a time-honored devotional endeavor. I find many places in the novel where the artist’s faith in Jesus and appreciation for his sacrifice come through clearly. Jesus is featured on the cover of the novel bound and bloodied, not calming the storm at sea or taking the little children in his arms. Jesus’ physical sufferings for us are portrayed realistically but also reverentially, not gratuitiously. Many times, as I reviewed such panels in development, I said out loud, “Hallelujah, what a Savior!” I know that’s the response the artist wants to draw forth from us.

Along those lines, one of the most moving and meaningful panels for me, which captures the artist’s faith, skill, and imaginative power all at the same time, is the one that shows Jesus willingly surrendering  to his would-be captors in the Garden of Gethsemane. 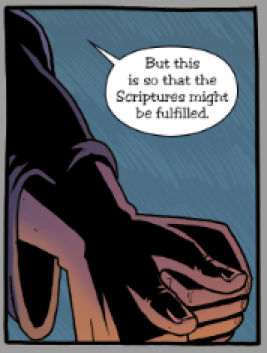 One thought on “That was a big temple! (And other realizations from a graphic-novel version of Mark)”

How long did Jesus live in Egypt?

Wasn’t the Messiah supposed to be named Emmanuel?

Was Jesus the “angel of the Lord” who appeared to the shepherds?

Why would the Magi have wanted to worship the king of the Jews?

If Jesus gave up his divine attributes to become incarnate, how was he able to do miracles?

How was Jesus from the line of King David if his real father was not Joseph?