Q.  This is one I’ve always wondered about.  In Luke 16 Jesus tells a parable about the shrewd manager.  I think he shouldn’t have charged the creditors less just to start the cash flow, but the part that I don’t get is Jesus’ last remark—something like, “Make friends with the unrighteous, so that when you fail, they might accept you into everlasting homes.”  (Huh? scratching the head).

This is definitely one of Jesus’ most puzzling parables.  It seems as if the master represents God, and the manager stands for a typical servant of God, so it’s pretty shocking to hear Jesus say, “The master commended the dishonest manager . . .”

To understand what’s going on here, it’s helpful to realize that when Jesus tells a parable, there’s typically one single point of correspondence between the story he tells and something he wants us to understand about the kingdom of God.

For example, in the parable of the persistent widow a little bit later in Luke, Jesus talks about a judge who “neither fears God nor honors man.”  Yet somehow this judge represents the God who hears our prayers!  Jesus is making only a single point:  we are called to perseverance in prayer.  (There’s actually an implied contrast at the end:  If perseverance pays off even with such a judge, “Will not God bring about justice?”  So Jesus clearly isn’t making a further point about the character of God when he describes the judge.)

In the same way, the parable of the shrewd manager is making only a single point: 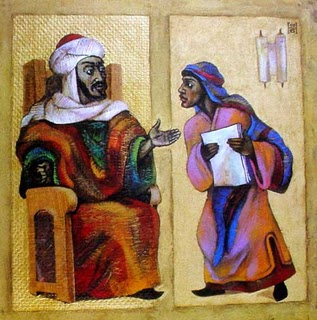 Soon the money we now have in this world will be no longer at our disposal.  (That is, our lives are shorter than we realize.)  So we need to use our money while we can to “make for ourselves friends” who can receive us into “eternal dwellings.”

In other words, use the money you have on earth to make friends with God.  Invest your money in ways that advance God’s purposes, and then God will take care of you when you leave this earth and “can’t take it with you.”  (As I say in my Luke-Acts study guide, the manager “provides for his future by using resources he’s just about to lose.”)

Jesus isn’t praising dishonesty or cheating.  He’s simply encouraging us to take the right attitude towards the money we have.  But he does this through some startling language, another common characteristic of his parables.

He’s not saying that wealth is intrinsically evil.  He wouldn’t call us to invest our wealth in God’s work on earth if it were.  But he is saying that in this world, money is often used to manipulate other people (just as the steward does here) and to undervalue or overvalue things compared to their true worth in God’s eyes.  In that sense it’s the “mammon of unrighteousness.”

But we can also use our for God’s purposes, and if we do, this will show that we belong in “eternal dwellings.”  We will have made friends not “with the unrighteous” but “with the unrighteous mammon.”  That is, by means of the corruptible and often corrupted money of this world, we can make friends who are really worth having.