Q. Dan Brown claims in The DaVinci Code (p. 304) that “text encrypted with Atbash” is found throughout Jewish mystical writings and “even the Old Testament.”  Is this true? 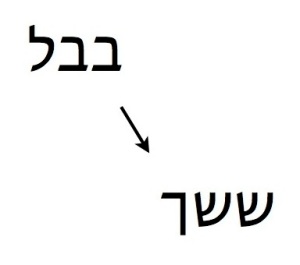 Thanks to reader Don Johnson (see comment below), I am now offering an updated version of this post.

Exactly two words in the Bible are encrypted in a code known as Atbash.

God gave the prophet Jeremiah the assignment of publicly announcing his judgment on the nations, including the Babylonian empire, which would soon conquer Jeremiah’s own country of Judah.  This assignment was fraught with danger for the prophet, so he spoke the word “Babel” (the Hebrew name for Babylon) in Atbash code, and it came out “Sheshak“:

“This is what the LORD, the God of Israel, said to me: ‘Take from my hand this cup filled with the wine of my wrath and make all the nations to whom I send you drink it. . . . After all of them, the king of Sheshak will drink it too.'”

Enough of Jeremiah’s listeners could apparently decrypt this code that the promise of ultimate deliverance could be spoken without the prophet’s life being unnecessarily jeopardized.

Later in the book there’s another prophecy in which Jeremiah was able to speak more freely (perhaps because it circulated privately until it could be shared more openly), and in that prophecy he leaves no doubt about identity of the earlier Sheshak:

“How Sheshak will be captured, the boast of the whole earth seized!
How desolate Babylon will be among the nations!”

At the start of that prophecy he also identifies Babylon with Leb Hamai, Atbash code for Chaldea, another name for the Babylonians:

“See, I will stir up the spirit of a destroyer
against Babylon and the people of Leb Kamai.”

But Babel and Chaldea in Jeremiah are the only two words in the Bible that have been put in Atbash code.  So we shouldn’t search the Scriptures for mysterious encrypted messages the way the characters would in a Dan Brown thriller.  There aren’t any messages of that type there.

Instead, we should be inspired by the faith and courage of prophets like Jeremiah, who were agents of a divine resistance movement that proclaimed the time when earthly pretenders would be put down and God’s kingdom established throughout the earth. And we should ask how we can be the same kind of agents in our own place and time.