Q. It took the United States almost 90 years after it was founded, supposedly on Christian principles, to end slavery.  Finally people understood it was wrong to own another person.  Even after that, African Americans have been kept down and discriminated against.
In Leviticus 25 it gives instructions on how to purchase foreigners, even their children, and treat them like property.  But they were told that the people of Israel must not be treated that way.
In Exodus 21 it talks about how to buy a Hebrew slave—that they must set him free in the seventh year, and if he got married while he was in slavery, he can’t take his wife with him when he’s freed.  If he wants to keep his wife he has to say he’s happy with his master and have an awl pushed through his ear lobe, and agree to slavery for life.
Also in Exodus 21 it tells you it’s all right to beat your slave to the point of death, as long as he doesn’t die right away.
Jesus didn’t seem to condemn slavery either, and the apostle Paul even says that slaves should obey their earthly masters with respect and fear, as sincerely as they would serve Christ (Ephesians 6:5).
Why would God permit the Israelites, and later the Christians, to treat people like this?

Statements like these that the Bible makes about slavery are very troubling to thoughtful and compassionate followers of Jesus.  It’s important to emphasize that we get a very different picture of the Bible’s view towards slavery when we consider the big picture rather than individual verses.  So let me speak about the big picture first in this post, and then in my next post discuss the statements you have cited.

The central redemptive metaphor of the Old Testament, echoed throughout that part of the Bible, is God’s deliverance of the Israelites from slavery in Egypt.  To me this sends a clear message that God did not create slavery and does not approve of it; God wants people to be free.  Slavery is instead like divorce, which, as Jesus explained to the Pharisees, is something that’s regulated in the law of Moses to protect people when it happens, not something that God commands.

While Jesus didn’t speak directly against slavery, he did use the image of being set free from slavery as a metaphor for the salvation that he brought.  He could only do this if slavery wasn’t something that God instituted and upheld.  For his part, the apostle Paul said that in Christ there was neither slave nor free, and he told slaves to gain their freedom if they could.  He lived out this big vision in a practical situation when he appealed personally to Philemon to set Onesimus free.

It was Christians inspired by this big-picture teaching of the Bible who fought successfully to end government-sanctioned slavery in Britain, the United States, and other parts of the world.  Contemporary Christians are equally motivated by their biblical convictions to fight modern-day slavery through organizations such as the International Justice Mission. 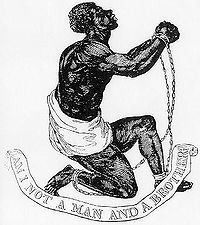 “Am I not a man and a brother?” Influential cameo created by Josiah Wedgwood, founder of the British pottery company and committed abolitionist.

By contrast, people who wanted to maintain slavery appealed to individual verses.  In response, people who wanted to end slavery argued that slavery in ancient times—the situation the Bible actually speaks to—was very different from slavery in the American experience.  They challenged slaveholders who appealed to the Bible at least to practice a much more moderate, “biblical” form of slavery (the slaveholders declined to do even this):
• Ancient slavery was not racially based and did not presume that some races were inferior to others and so could justifiably be enslaved.
• In biblical times masters owned their slaves’ labor but not their bodies or persons; that’s why masters were required to set their slaves free if they caused them permanent bodily injury.  They were also required to set free concubines (female slaves they had married) if they did not honor them as full wives.
• Freedom could be purchased for slaves by their relatives; slaves could even buy their own freedom.  In Roman times some slaves were adopted into their masters’ families and even became heirs; many interpreters believe this cultural practice lies behind the metaphor of “adoption to sonship” that Paul uses in Romans to describe salvation.  In a more ancient example, Abraham’s household servant Eliezer would have been his heir if he hadn’t had a son.
So when we see the Bible regulate slavery rather than abolish it outright, we need to recognize that it’s regulating a very different institution than the one known from the American experience, which violated at every turn the biblical laws designed to protect slaves.

(In my next post I will address the individual passages you cited.)

3 thoughts on “Does the Bible condone slavery? (Part 1)”

In this blog, the author of the Understanding the Books of the Bible study guide series, the Rev. Dr. Christopher R. Smith, shares his reflections about the Scriptures and answers questions from users of the guides and from others who want to find out more about the Bible. If you have a question, please use the link at the top left of this page to reach the comment box. Thank you!