If we could restore the Liberty Bell to its original condition, removing the famous crack, should we?

This is one more way to ask the big question I’ve been pursuing in this series of posts. As someone put the question in the case of the darkening and harmonizing patina that had accumulated on the Sistine Chapel ceiling before it was cleaned, “Do cultural associations and markings of the passage of time heighten or mar the aesthetic value of art?”  That is, does the full creative process include settings and adaptations introduced by later users?  Or do the accumulated marks of an artistic creation’s subsequent history as a cultural artifact never really become part of its essential substance and meaning?

Our interest in these questions arises from the way The Books of the Bible seeks to strip away the accretions of centuries from the Scriptures.  This leads us to ask, Is the Bible what it has become? And if it is, does that mean we should keep engaging the Bible as it has come to be known, in its chapter-and-verse form, rather than by seeking to repristinate it in some way by recovering its constituent literary creations?

To help answer these questions, let’s think about the Liberty Bell.  It was designed as an object that would be not just functional, but beautiful.  Beyond any beauty of form or adornment, it was specifically intended, like all bells, to produce a pleasing musical sound (rather than to summon the attention by making a jarring noise, like a horn or a siren).

When the Liberty Bell cracked, the beauty of its sound was marred.  So there is certainly a difference between how the bell was originally intended to sound and the way it would sound if it were struck today.  What reasons might we give for preferring the original “art“ or “beauty“ of the bell to its present “art“ or “beauty,“ or vice versa?  In other words, if it were somehow possible to restore the bell to the condition it was in before it cracked, and recapture the original sound of its tone, would we want to do this?

Probably not.  The Liberty Bell has become a powerful cultural icon in its present condition; the crack makes it instantly identifiable.  It has come to symbolize the foundational American value of “liberty“ for a series of reasons:
– Its inscription, “Proclaim liberty throughout the land”;
– Its association with the founding generation through its use to toll their deaths (many believe it was during the 1835 funeral of Chief Justice John Marshall that it cracked beyond repair);
– The symbolic use that was then made of it by abolitionists and suffragists.

Most poignantly of all, because of the crack, this is a “wounded” bell.  It has been injured in the cause of “proclaiming liberty.”  Freedom can only be had at a price, and the wounded bell now represents and commemorates all who have paid this price for our freedom. 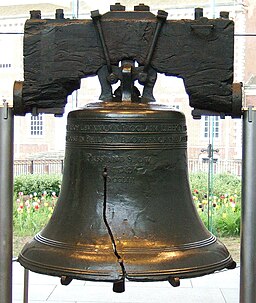 In other words, there seem to be some very good reasons for preferring the Liberty Bell as we have come to know it to what was originally the “Pennsylvania State House steeple bell.”  So is this evidence that subsequent cultural development sometimes should be preferred over original artistic intent?

Not exactly.  This bell may actually have been intended from the start to become a cultural icon.  Many historians believe that it was commissioned in 1751 to commemorate the fiftieth anniversary of the Charter of Privileges, by which William Penn transferred legislative authority from his Proprietorship to the Pennsylvania Assembly.  This is why, they argue, the bell was ordered with its inscription about “proclaiming liberty,” which is actually a quotation from Leviticus, referring to the year of jubilee.

The later uses of the bell as an icon for liberty would therefore be a development of these original intentions.  We can reasonably surmise that the Pennsylvania colonial legislators who ordered the bell would not want us today to sacrifice its greatly heightened iconic value simply to restore its tone.  Not repairing the crack would thus not only be preferable from a cultural and artistic standpoint, it would also be in keeping with what seem to have been the original intentions of the creators.

In other words, if this historical theory is correct, what came first was the Pennsylvania Assembly’s desire to commemorate the anniversary of the Charter of Privileges.  What came second was a specific means of marking this anniversary:  the commissioning of a bell.

So when we prefer the current, cracked bell with its heightened iconic value, this isn’t just an aesthetic judgment (“certainly a national symbol shouldn’t be destroyed just to restore the tone of a bell”).  Rather, it is an expression of respect for the original intentions of the bell’s patrons.  Precisely because the bell is cracked, it can now be used only as an icon for liberty (its constituting purpose), and not also for secondary purposes such as summoning the Assembly, celebrating special events, etc.

So in this case, the “markings of the passage of time” that we wish to retain are meaningful because they express the ultimate intentions of those who created the bell.

But in other cases, good reasons can be given for stripping away at least some of the marks of an artistic creation’s subsequent history as a cultural artifact, specifically in the interests of preserving or recapturing the creator’s original intention.  We’ll look at such a case next time.