Esther, the next volume in the Word for Word Bible Comic series of graphic-novel presentations of biblical books, is now available. I find it another tour-de-force by the artist, Simon Amadeus Pillario. It’s particularly impressive that he has researched and portrayed a third cultural and historical context, that of the Persian Empire, after the land of Canaan in the settlement period for the Joshua, Judges, and Ruth volumes and the first-century Mediterranean world for Mark. All the sumptuousness of the Persian court, where the story of Esther takes place, comes through in the detailed and historically accurate artwork. 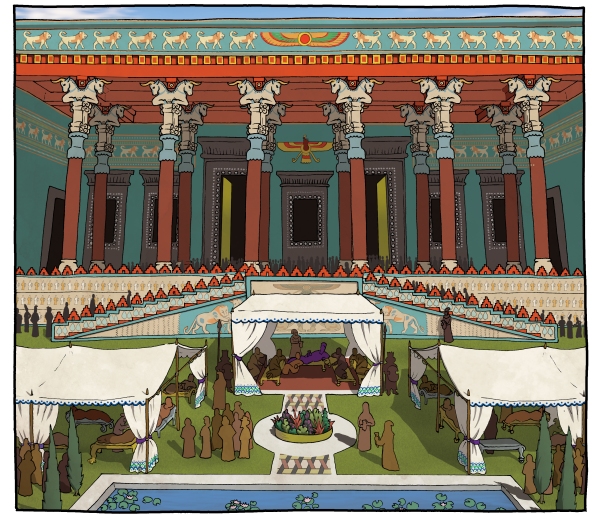 The cultural and technological achievements of the Persians are also depicted, for example, the way the emperor could communicate rapidly and effectively in multiple languages throughout his far-flung territories.

Even though I’m a lifelong student and teacher of the Bible, seeing another volume of the Word for Word Bible Comic, as always, has given me insights into the biblical story that I never had before. For example, because Mordecai won’t grovel before him, Haman wants to have him hanged on a gallows “fifty cubits high.” We read this and don’t think much of it, as we may not know how to translate the ancient measurement into modern terms. But in the panel that shows Haman being hanged on his own gallows, the comic illustrates that this actually works out to seventy-five feet high! (A small-scale replica here would not do this justice; the image takes up an entire page, and it stops you in your tracks. You need to see it for yourself in the comic.) Haman not only wanted to kill Mordecai, he wanted to make an example of him for all to see, far and wide. He was a terrorist in the true sense of the word—he wanted to create terror that would keep anyone from opposing him.

But beyond these realistic and informative touches, the real genius of this latest volume is its characterizations of Esther, Ahasuerus, Mordecai, and Haman. The story revolves around those four figures; it moves back and forth between scenes with each one  at the center. While the comic is faithful to the biblical narrative, reproducing every word, it tells much of the story just through their facial expressions—and they are eloquent. Here, for example, Ahasuerus is contemplating whether to spare Esther’s life after she steps uninvited into his throne room.

Through such portrayals, readers of the comic are drawn immediately and irresistibly into the intrigue between Esther, Ahasuerus, Mordecai, and Haman, and thus right into the fast-paced story itself. But as it should be, Esther herself is at the center of the book and the story. Her portrayal, in which she develops from a little girl in pigtails to a stunning natural beauty who is also a woman of strength, courage, and character, is the highlight of the comic. You’ll have to get the book yourself to see this entire development unfold. But here’s a preview of how it begins: 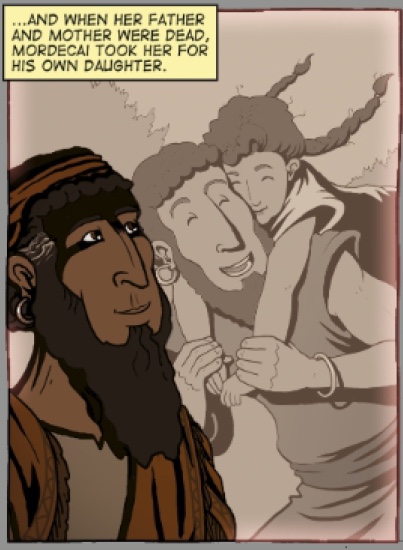 You can order Esther in the Word for Word Bible Comic series at this link.

And, as a special bonus this time around, you can download and preview the first chapter at this link.

I was going to say, as I have for all the previous volumes, that I highly recommend this book. But I think if you download the preview, I won’t need to say another word. You’ll see for yourself!

Disclosure: I am an unpaid biblical-theological consultant to this project. (It’s a great privilege!)

One thought on “Esther in the Word for Word Bible Comic: Another tour-de-force”