Simon Amadeus Pillario, the artist who’s creating the Word for Word Bible Comic series of graphic novels, has just launched a Kickstarter campaign to help him complete the next volume in the series, the Gospel of Matthew. As I’ve mentioned in previous posts, I am a biblical-theological consultant to this project (unpaid), and so I get an inside view of its workings and an advance glimpse of its progress. I must say that I’m just as excited about this next book as I have been about all the others, right from the start: Judges, Ruth, Mark, Joshua, and Esther. Let me give you a little peek into how this next volume is shaping up, and I think you’ll be excited too.

First, as always, biblical scenes are depicted in the comic based on painstaking historical research, so that the customs, clothing, buildings, means of transportation, etc. are all shown accurately and faithfully to the actual events. As I said in my very first post about this series, “One might argue that this is actually a more authentic presentation of the Bible than our bare printed texts, which invite us to fill a visual vacuum by supplying pictures in our own imagination of people and events. We tend to do this as if they happened in our own time and place, or else in a generic ‘Bible world’ where nothing really changes culturally from Abraham to Paul. This series instead brings the reader very authentically back into the specific cultural world in which each story originated, through careful archaeological research.” Here, for example, is a detail from the scene in which the forthcoming Matthew comic shows Joseph “taking Mary home” to be his wife: 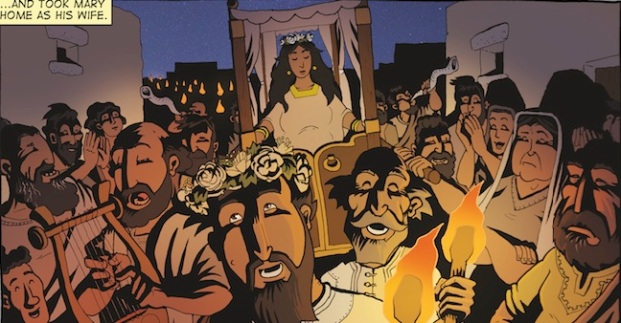 But because of this concern for historical authenticity, in some cases the comic has to make reasonable judgements about the likely historical background to certain episodes. For example, all Matthew tells us is that Joseph and Mary went to “Egypt” with Jesus when they fled from Herod. However, one short episode in the gospel takes place during their time of flight, and it has to be set somewhere. Where should that be? The comic places the family in Alexandria. Readers of this blog will know that that’s exactly where I think they stayed (see my post, “Where did Jesus live in Egypt?“), so naturally I think that is fair enough. Here’s the panel showing the location, with the famous lighthouse in the background:

Also in this next volume, the artist continues to demonstrate delightful and amazing creativity in presenting the text of Scripture visually. For example, consider what he does with Jesus’ genealogy—just a list of names, right? No, each figure in the genealogy is accompanied by a little picture that captures a key moment in his life. I have to admit that I had a lot of fun trying to determine what was going on in each picture, based on how the person’s story is told in the Old Testament. Isaac, for example (the second from the left in the top row in the panel just below), with eyesight failing him in old age, is trying to figure out whether Esau or Jacob stands before him asking for his blessing. The three sections of this genealogy are shown on three separate panels of the comic, so that the visual presentation also respects the literary structure. 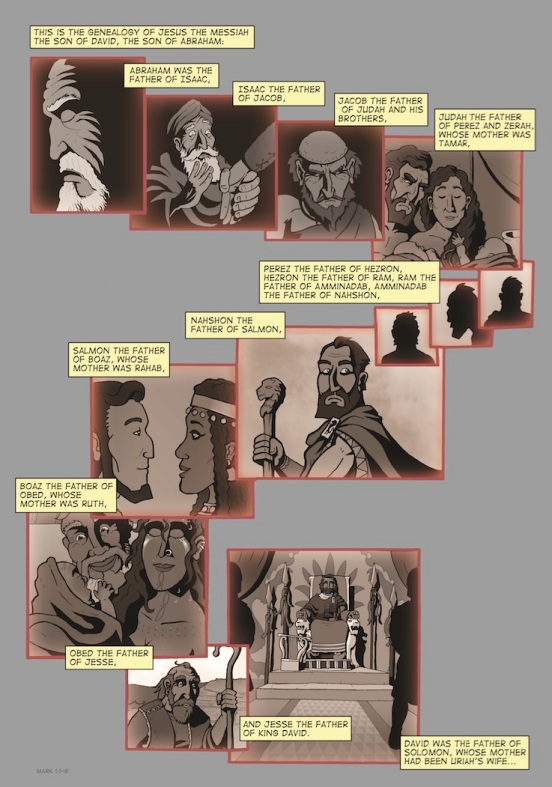 One more thing to add about the Gospel of Matthew in the Word for Word Bible Comic is that it will use the New International Version (NIV). Previous volumes used the World English Bible, which is in the public domain, but the artist has gone to great lengths to address the concerns of the people who license the NIV so that the comic can now feature a translation that is itself acknowledged and trusted for its accuracy and reliability. I recognize that the licensors are expressing a real vote of confidence in this project by allowing the NIV to be used with necessary alterations such as the removal of quotation marks and formatting required for the printed page, as well as adaptations for the graphic novel format such as adding emphasis by using bold type or all caps, and replacing commas with ellipses that connect speech bubbles.

At this point I’m sure you’d love to see more, and you can—you can download a PDF sampler of the Gospel of Matthew in the Word for Word Bible Comic here. And you can see everything that’s happening in the Kickstarter campaign at this link. I invite you to support the campaign and become a part of this project!